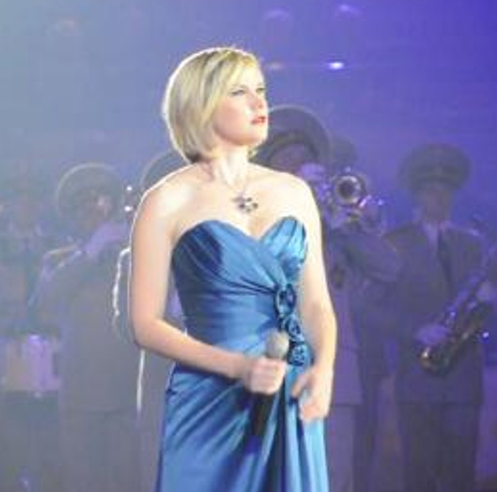 Crystel Benton is a New Zealand born classical singer trained both in New Zealand and The Netherlands. She made her operatic debut with Otago Opera singing the role of Gretchen Larnach in the New Zealand opera 'Larnach' in 2007. After graduating from the University of Otago with Honors in 2008, she left New Zealand for Europe studying in both Italy and London before settling in The Netherlands

In 2012 Crystel completed a Masters of Music from the Utrecht Conservatorium, Netherlands and in the same year performed the role of Gilda from Verdi's 'Rigoletto'. Later in 2012 Crystel performed for the first time with the Internationale Taptoe België as guest soloist returning in 2014 and 2015. From there she was asked to sing as a soloist at the Berlin Tattoo later that same year.

During 2013 Crystel was invited to tour with Musikparade for 10 weeks as the guest soloist, getting the chance to perform in over 30 cities and arenas including some of the biggest arenas in Germany. In 2014 Crystel returned to Musikparade in January performing with New Zealand Highland Dance Company and Celtic Pipe Band and in February made her French debut performing as the guest soloist in the Carnaband's Show as part of the Carnaval de Chalon-sur-Saône also returning in 2019. Crystel continued to be asked to events with highlights including The National Tattoo in Bulgaria in 2016 and The Nationale Taptoe Netherlands in 2015 and 2019

When not performing Crystel spends her time teaching music to children at the Rivers International School Arnhem in the Netherlands, as well as giving dance and singing lessons through her school Sing & Fling music and dance studio.

Crystel began her highland dancing journey at the age of 5, along with Ballet (RAD) and Modern dance. Completing examinations and competitions under The New Zealand Academy of Highland Dancing, Crystel achieved a high level, placing top 5 in various national championships and was chosen to be member of the first NZ dance team to Attend and perform at the Royal Edinburgh Military tattoo in 2002

In 2010 Crystel made the switch to Royal Scottish Official Board of Highland Dancing, later completing professional exams to become a Member of the United Kingdom Alliance (UKA Dance) to compete and teach in Europe. In 2015, she then began her own dance School, Sing & Fling music and dance studio, attached to Rivers International School Arnhem, in the Netherlands, teaching highland dancing to children from all over the world

As a Performer, Crystel has attended various tattoos including In Spasskaya Tower Military Tattoo in Moscow, The Norwegian Military Tattoo in Oslo, Musikparade Germany, Belgium International Tattoo, As well smaller Tattoos in France, Denmark, Netherlands and Germany with the Dutch Pipes and Drums