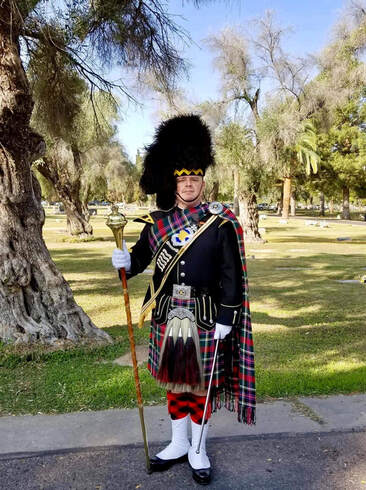 Kevin Conquest has been involved in the Scottish arts for three decades as a drummer, piper, and very accomplished Drum Major

He has been fortunate in competition to earn titles as a North American champion, a US Champion, a Canadian champion, and numerous major championship finals in the UK, including the World Championships. He also enjoyed competing in Grade 1 with the Los Angeles Scots and in Canada with the 78th Fraser Highlanders and Dowco Triumph Street

Kevin currently leads the Mesa Caledonian Pipe Band in Arizona as well as the United States Coast Guard Pipe Band.  He additionally serves as an adjudicator with the Western U.S. Pipe Band Association. He is well known for his massed bands displays at various Highland Games across the continent including Stone Mountain and Costa Mesa

Drum Major Conquest was also selected in 2019 for the Royal Edinburgh Military Tattoo as a member of Pipers Trail. This allowed him to perform through the month of August for 8,000 people each night at Edinburgh Castle

Kevin’s involvement with Scottish heritage runs deeper than just pipe band. His volunteer efforts to enrich the diaspora was recognized with a grant of personal arms from the Lord Lyon in 2017 and investiture to the Order of Saint John in 2018