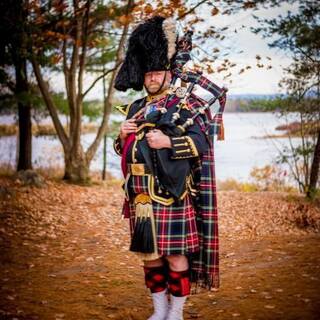 Tattoo Director Seann Alderman started piping at the age of twelve and was appointed Regimental Piper when he joined the Canadian Forces as a Reserve Infantry Soldier in October 1989. He transferred to the regular force in 1995 and was posted to Canadian Forces Base (CFB) Gagetown with the 2nd Battalion, the Royal Canadian Regiment (2 RCR), where he performed double duty as both an infantry soldier and a member of the 2 RCR Pipes and Drums.

In 2001, he re-mustered to the trade of Lineman, and a year later he was granted the opportunity to complete his Pipe Major’s Course. In 2003, after completing a competitive audition process, Seann was offered a position as a regular force Musician and subsequently posted to the position of Pipe Major of both the 2 RCR and 3 Area Support Group Pipe Bands in Gagetown New Brunswick.

Seann has enjoyed having the opportunities to represent the Canadian Forces in many high profile performances. He has done so not only for the Canadian public, but also to international heads of states, such as the Queen of the United Kingdom, United States President Bill & Hillary Clinton, the King and Queen of Norway, and many others to name a few. He has also represented the Canadian Forces all over Europe. In September 2007, he was given the opportunity to play on Red Square, Moscow at the Kremlin Zoria Tattoo, which alongside performing on two occasions at the famed Royal Edinburgh Military Tattoo, he ranks as among the two most significant events of his playing career.

​Seann also has competed in the various grade levels in the Piping and Drumming competition circuit. In 1990-1991 he won North American Championships with the Special Service Force Pipes & Drums and just recently in 2019 won the North American Championships with Peel Regional Police Pipe Band at the grade 2 level. As a Senior Pipe Major for many of the military tattoos Seann has performed over the years, he has worked with and has been a part of the process of how a tattoo is run from start to finish, and will be directing this knowledge toward the development of the Estes Park International Tattoo.